Law Enforcement Out in "Full Force" for Holidays 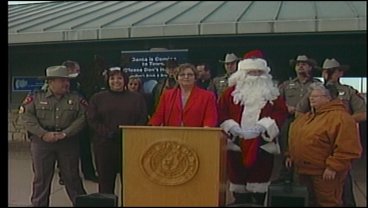 COOKE CO., TX --  Don't be surprised if you see more cops on the road over the next couple of weeks.  It's part of the Holiday 2009, Don't Drink and Drive campaign.  KTEN's Chris Severy reports.

The theme this year is don't drive if you're tipsy, buzzed or Blitzen.  Santa is coming to town, please don't hit him.  Cooke County Sheriff Michael Compton knows all too well the tragedy that can result from drunk driving.  He's seen more than he'd care to remember through his decades in law enforcement.  Sheriff Compton said, "He was pinned in the car for a period of time and we had to get him to the hospital and his mother came and it was one of the most heart-wrenching experiences of my life to tell her that her son had been killed in the wreck."  And that's why he and others from law enforcement agencies across Texoma want to get the message out: drink and drive this holiday season and be prepared to go to jail.  "Our goal is to reduce traffic fatalities and injuries.  We want folks to go to grandma's house, but at the same time, obey the traffic laws, don't drink and drive, watch your speed and buckle everybody up."  Texas DPS Trooper Lonnie Haschel knows they say the same thing every major holiday, year after year.  "We can't say it enough.  That's why we're out here all the time, constantly, year 'round, looking for intoxicated drivers.  Last year in Texas we lost 1400-plus people because of drunk driving."  Sheriff Compton added, "There's campaign after campaign after campaign.  but that is the reality of it.  They're not coming home.  They're gone in an instant for no reason."