Gun Goes Off During Lunchtime at Sherman Restaurant 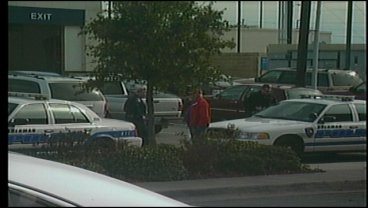 SHERMAN, TX - Police are investigating why a gun went off inside a crowded Sherman restaurant Thurdsay afternoon. It happened at Carino's Italian Grill on Highway 82 just after 12:30 p.m.

Police say a male customer, who has a conceal-carry permit, started to put his coat on after finishing lunch and the gun fell out of his pocket and went off. The bullet did not hit anyone, but the commotion did cause quite a stir.

"We were just across the booth, yeah across from the wall," said one of the patrons we spoke to after the incident. "So the wall was nice. We were kind of hiding behind it. But she was real brave and poked her head up. I saw what was going on and the man just said, 'We gotta get out of here and he got up and left."

The man was not arrested, but Sherman Police will forward the case to the Grayson County District Attorney's Office for possible prosecution under a deadly conduct case.

For more information on places where concealed guns are allowed follow this link: http://www.txchia.org/txcarry.htm