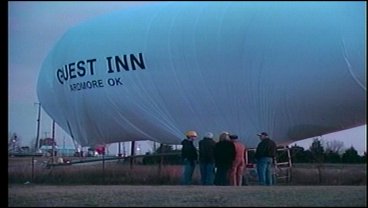 ARDMORE, OK - A blimp makes an emergency landing just south of Ardmore along I-35 and now the Federal Aviation Administration is investigating.

Marvin Polzein built the blimp himself and was flying the blimp above Carter County late Tuesday afternoon. He tells KTEN he'd been flying for several hours that afternoon when he decided to head back to his hanger in Ardmore.

It was at that point Polzein realized a motor mount had come propellersted and cracked his propellor. Polzein says he knew he had to get it on the ground and his only option was in the median of Interstate 35.

Traffic along I-35 was shut down while OHP troopers responded to the scene, and witnesses helped Polzein out of the aircraft. The blimp was then re-located to the corner of Highway 70 and Highway 77.

This is not the first time Polzein has had trouble with his blimpPolzeinen crashed his blimp in Carter County back in May. He says he's flown the aircraft three times since then, but for now he is going to take a break and put it away until next summer.

FAA officials told KTEN Wednesday afternoon they are investigating the inwhether. They are looking into whether Polzein was certified to fly the blimp and if the blimp should be classified as a commercial aircraft.  The name "Guest Inn", the Ardmore hotel Polzein operates, is printed on the side of the blimp.

FAA spokesman Lynn Lunsford says there is a specific pilot's license for operating a blimp and they are now trying to determine if Polzein is certified to fly that aircraft.