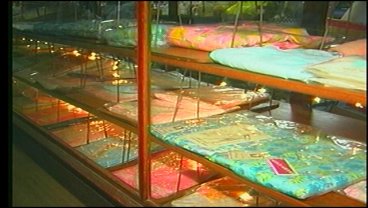 CADDO, OK--A local business is prospering despite the recession. In fact, it first opened it's doors at a time when most businesses were closing theirs--during The Great Depression back in the 1930's. Michelle Gillespie reports that Craigheads in Caddo celebrated it's 75th year anniversary this year, and turns out, it's been around for so many years because the community depends on it.

It's a 100-year-old door that leads into a 75-year-old general store--a big piece of history in the small town of Caddo, Oklahoma.

"It kinda draws people because it is a step back in time and we have a lot of locals and people who have a connection to the town that always come in," says Belinda Davison.

Belinda Davison is the current owner of Craigheads but she's quick to give all the credit for the store's success to it's original owners--the Craighead family who owned it until Belinda bought it almost eight years ago.

"We try to keep it as close to the original as we can--and try to have a nostalgic line to stay true to the store," says Davison.

The store still has the same green tile ceiling and furniture as it did back in 1934. And it's that nod to the town's rich history that keeps local folks coming back year after year.

"We come back down here every chance we get, we like antiques, any kind of antiques and this does remind you of an old dime store," says one shopper.

Some of the oldest antiques you might find at Craigheads are greeting cards for World War II soldiers, hairnets from the 1950's and even pajamas, as seen on NBC Today's Show, back when it began in 1952. But it's the mix of old and new that keep families coming generation after generation.

"My dad comes here to get some ornaments for my mom and my sister," says Hannah Hodge.

"Parents like to bring their children back and show them things they bought when they were children," says Belinda Davison.

Davison, says she plans to pass the store down to her daughters when she gets older and can't run it by herself any longer.