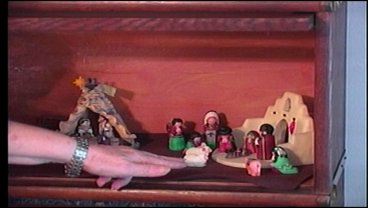 ARDMORE, OK --We've showed you some amazing homes decorated to the nines with beautiful Christmas lights, but one woman in Ardmore decorates the inside of her home with nativity scenes. Meredith Saldana reports.

"These are all native Americans. This one is Pueblo Indian, these are the Plains Indians and this is a tribe from Arizona. " Lee Miller says her collection of nativity scenes started over 25 years ago. Her husband traveled all over the world and would bring her nativity scenes from places like Kenya and Mexico just to name a few.

But, Miller's fondest memory is of a trip to Alaska where they bought a totem pole nativity scene. "A pastor there, after he retired, decided that he wanted to try to find a way to take Christ to the native Eskimos, and so he studied the history of the totem and he went through, and there's a story that goes with it and it starts at the bottom."

Miller has nativity scenes in every form imaginable, blankets, jewelry, clothing, a few puzzles and even rubber duckies! "This one's from a garage sale!"

Although each scene is significantly different, one thing remains the same. "The central figure of all these never changes. You know Jesus is the light of the world. He is the reason that we celebrate Christmas."

Lee Miller's husband passed away a few years ago, and she says looking at each nativity scene brings back memories of when and where each was one was purchased.