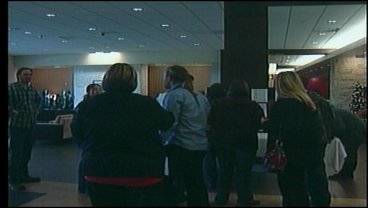 Call it a sign of our current economic times.  With one in ten people looking for work, Tuesday's job fair at TMC was like so many others recently, packed, even before the doors opened.  Mara Vess lives in Dallas.  She's been out of work for 5-months.  So, coming to this job fair was a no-brainer.  Vess said, "it's been miserable.  There's not enough jobs.  The market's getting smaller, especially in the electronics industry that I was working in."  Even though she spent years in the electronics industry, the opportunity to get into healthcare is one she's not going to pass up.  "Now trying to get back into the medical field, which is where I started out my employment in the first place and kind of moved from there to electronics and now trying to get back," said Vess.  She's not unlike hundreds of others who filed through the doors at the new TMC facility Tuesday, each of them looking for a fresh start with a new job.  Joni Horn, with TMC, said, "we've got a lot posted on our website.  We've had people come for positions that aren't posted, but we've accepted and talked to them about some possibilities later on."  Mara Vess is hoping that possibility comes sooner rather than later.  She said, "there's a lot of help and assistance if you need any.  They're here.  They're willing to work with you and willing to show you what you can do to actually become part of their team."