Oklahoma Grant Money That Could Make a Difference in Your Child's - KTEN.com - Texoma news, weather and sports 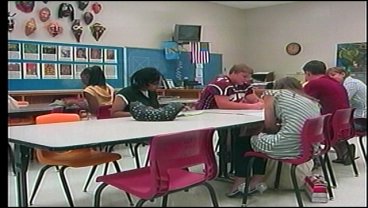 Talking about your child's future and education now and money that could make a difference in our local schools.  Tuesday, Governor Brad Henry's Chief of Education Strategy and Innovation met with educators in Ardmore. Meredith Saldana was there and has more on this story.

Kathy Taylor is traveling across the state of Oklahoma this week to collect education reform ideas from local school administrators and other members of the community.

But are the students really getting every tool needed to graduate?

The State Department of Education says they want in on a federal grant that will award up to $175-million to each state that qualifies.

That state can then award 50% of that to local school districts in an effort to raise the bar on education in Oklahoma.

Taylor says, "We understand that right now teachers do not have the tools that they need, either in professional development or classroom tools, to get those kids where they need to be to compete for a job in this economy."

Less than 12 states will be awarded the money from the federal grant and Taylor says Oklahoma needs to be one of them.

"Oklahoma needs this money because we have to increase the high school graduation rates.  Far too many kids are dropping out.  Even kids that we're graduating are not ready for a career in college.  And if we want to keep an economically viable state and continue to improve our economic health, education is the way to make it happen."

Dr. Ruth Ann Carr, Superintendent of the Ardmore School District is in favor of applying for "Race to the Top."

"Well actually this program was designed for a school just like Ardmore. For a high needs school, high poverty school, that's looking to improve student achievements.  That's why we're really interested in it," says Carr.

Applications must be submitted by January 19th and the state expects to find out if it's received the money for the fall, in late April.