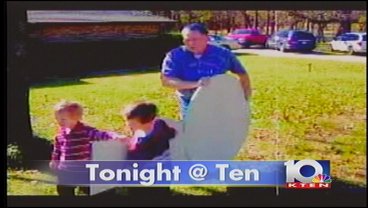 DENISON, TX---Just breaks your heart, a Frosty The Snowman Christmas decoration stolen from an elderly couple's yard in Denison but to one man it's more than just a snowman. It's a decoration that brings a grandfather and his grandsons together during the holidays. Michelle Gillespie reports. It's a story that makes you shake your head and wonder why, especially during the holidays and now that frosty is gone, Jerry Spradling is left wondering what he's going to tell his three young grandsons.

This is Frosty. A holiday decoration that sits in Jerry Spradling's yard every year, ever since he built it back in 1989. But this year, Frosty has gone missing and all that's left in his place, is a dirt hole in Jerry's front yard.

"It made me sad, when I came out here the other morning and I kind a did a double take and he wasn't there," says Jerry Spradling.

Someone stole the Frosty decoration while Jerry and his wife slept last Thursday night but he says he's more upset that his grandsons will be without their favorite snowman at Christmas-time.

"Back at Thanksgiving, we usually put him up, this year my grandson who is six years, four years and four years old, helped put him up and they were just so excited and so was I and we just had a wonderful time," says Spradling.

Jerry hasn't figured out what he'll say to his grandsons about what happened to Frosty when they come back to visit their grandpa next week for the Christmas holiday. He hasn't thought about it because he still drives around town hoping he'll find the snowman somewhere.

"If we find him, we'll know it's him because he is one of a kind," says Spradling.

Some of Jerry's neighbors have fallen victim to vandals as well. Down the street, one neighbor had their mailbox stolen and a bird bath knocked over. But despite the crimes, Jerry is keeping an open mind.

"We need to pray for whoever did this because it's got to be someone whose mind is not working properly, we don't know of anyone who dislikes us,"

Denison police say they have no suspects who may have been responsible for the crimes here on Spring Creek Drive.

And as for Frosty, Jerry says he hopes he and his grandsons can build a new snowman this Christmas.