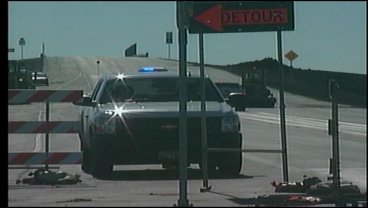 GRAYSON CO., TX --  The highly anticipated Hwy 289 extension, between Hwy 56 and FM 120 in western Grayson County, was supposed to have opened to drivers this week.  But Monday, KTEN's Chris Severy learned it won't.

Three weeks ago we told you that after one year of drivers using Hwy 289, the State of Texas will buy it from the county.  But the county issued bonds to pay for this highway and the first payment is due in January 2011.  Which means if drivers aren't using it before January 1, 2010, someone will have to come up with the money for that first bond payment.  Crews are hard at work, trying to fix problems with the way Hwy 289 was built, including how the road slopes to allow for proper drainage.  Grayson Co. Precinct 4 Commissioner Gene Short said, "we have found that the cross slopes do not meet specification and they're going to have to mill some of those out and relay some of the asphalt to bring it into compliance with some of our specifications."  Those problems mean Hwy 289 will not open this week as planned.  Good weather now seems to be the only thing that would ensure this highway even opens at all by the end of the year.  "The contractor assures me that within 7 or 8 days he can have that work completed," says Short.  As for what happens when that first bond payment is due, Commissioner Short says there are several options if the road isn't open by January 1st.  Short said, "first of all we can approach TXDOT to shrink that time period or we're gonna come in under budget on the project so that's another option."  According to Commissioner Short, one of those options also includes dipping into the county's general fund.  But several people close to the Commissioner's Court said that is not an option they even want to consider at this time.