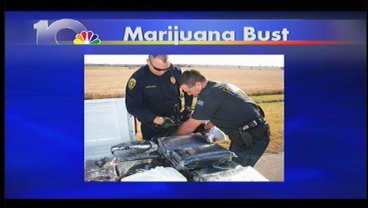 A whopping 221 pounds of marijuana was confiscated Monday morning.  It happened in Love County on Interstate 35 just south of Ardmore.  Meredith Saldana was there and has more on this story.

The Love County Sheriff's Department and Marietta Police tell me this is the largest drug bust they've ever had on the interstate.

It all started as a routine traffic stop Monday morning.

Police spotted the marijuana in black trash bags in the back seat of the truck.

The two men in the truck are from Texas and told police they were taking the 221 pounds of marijuana to Oklahoma, but they wouldn't specify where.

Police say a drug bust this large is rare and could affect drug availability on the streets.

Marietta Police Officer, Eric Grisham, says, "It puts a dent in it. I think it's valued at around $287,000.00 street value.  So it's gonna put a hurt on somebody's business somewhere."

Grisham and Undersherrif Jason Bone attended a criminal and terrorist interdiction class in September and say techniques they learned in the class helped them out.

They were taught how to pick up key indicators and roadside interview techniques things they didn't learn in basic academy.

Police are not yet releasing names of the two men involved and say they believe the two men will be charged with trafficking, which is a felony.