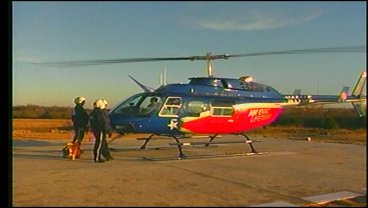 SHERMAN, TX -- A local medical air team is changing its name. In two days, Sherman Texas Lifestar will officially be refereed to as Air Evac Lifeteam. Deeda Payton reports on why they are making the change.

It's all in an effort to make the medical air team more efficient. Recently, Lifestar moved from Wilson N. Jones hospital to a new facility off highway 75 near the Sherman-Howe line.  Now, they are changing their name to match their parent company's name.

Lifestar serves Grayson, Collin and Fannin county and responds to emergencies in Oklahoma. It is owned by Air Evac, so the name change is to put the medical air team under the same umbrella. The name change will be official on Tuesday, December 15th.

Flight Paramedic, Donald Morrow, says they respond to about a call every day of the year. Their company goal is a seven minute lift time which Morrow says was difficult when they were based out of Wilson N. Jones, but now that they are located off of highway 75, they have a much quicker response time. Everything they need is now in one location. "It was a move to combine our maintenance and fuel and the quarters all in one area as opposed to flying back n forth to the airport getting fuel and maintenance we can do it all right here."

Morrow also gave me a tour of the crew's new quarters which is inside a former model home off of highway 75 in South Sherman.

He says yes, they have moved into a new location, are changing their name and getting new flight suits, but everything else remains the same. They will keep the same crew and the same protocol.