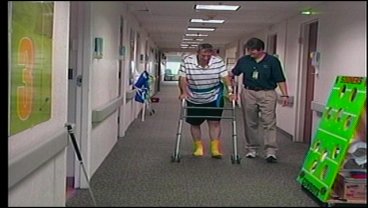 Mercy Memorial Hospital, in Ardmore, has a new program for patients who have full hip or knee replacements.  The hospital says it's helping patients heal faster, go home sooner and feel more independent.  Meredith Saldana has more on this story.

Prior to this program patients were lucky to be sent home about 4-5 days after hip or knee replacement.

Now patients are only staying 2-3 days and are feeling less pain.

It may look like an ordinary hallway, but don't be fooled.

It's actually known as the I-35 Adventure.

Part of the new program at Mercy Memorial's Joint Replacement Center that focuses on education, wellness and socialization.

Coordinator Lori Powell says, "It's a wellness program. So we treat them like they're well. They don't wear hospital gowns ,when they're here they're wearing their own clothes. We try to make it an atmosphere of fun."

Haskell Grant had knee replacement surgery on Tuesday afternoon and 2 and a half days later he's walking on his new knee and ready to be discharged.

And he credits his success to the new program.

Grant says, "I was kinda surprised how well I can get around on it."

There are five stations that make up the I-35 Adventure.

The Turner Falls station focuses on walking up the stairs on their new hip or knee.

And they even get to putt at the Dornick Hills station that focuses on hip and knee movement.

And, don't forget the stop in Norman for bedlam.

The station is an OU versus, you guessed it, OSU bean bag toss.

"It just keeps you motivated and kinda competitive you've gotta be competitive with the others," says Grant.

Powell adds, "We try to make it a little bit fun for them while they're up here so that it's just not that they're in their room performing their exercises with their therapist. They're out in the hall and there's some comradery and friendships going on."

Haskell's wife, Joann Grant says, "He's really done better than what I thought he would."

Patients are also feeling less pain which allows them to move around sooner.

The Joint Replacement Center Coordinator, Lori Powell, says, "The physicians and anesthesiologists are putting in nerve block prior to their surgery and that helps numb that area, their hip or their knee.  It controls a lot of their pain and when they're not hurting they're able to get up and perform some of their activities a little bit easier."

Joann Grant says after being a part of the program this week, she won't have a problem getting her husband to do his exercises.

She says her biggest problem will be getting him to slow down and stay home until he heals.