A Hugo Family Who Had Their Christmas Gifts Stolen Speaks Out - KTEN.com - Texoma news, weather and sports

A Hugo Family Who Had Their Christmas Gifts Stolen Speaks Out 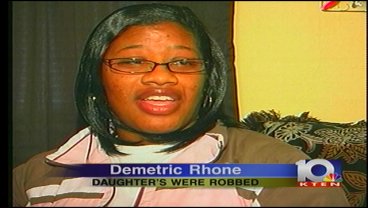 HUGO, OK -- A Hugo family's Christmas presents are stolen right from under their tree and police have no major leads. Deeda Payton spoke with the family.

It has been a week and still they have no idea who would do such a thing. Hugo Police say they are looking for the Christmas crooks who burglarized and vandalized a local family's home before leaving with all their Christmas gifts and their TVs.

The mother says the crooks broke into both her daughter's homes in the 800 block of West Main Street. "When they came home they found that their houses, the doors, had been kicked in at the back of the houses."

Not only were they robbed, but one of the daughters says the burglars even ruined her brand new furniture with bleach. "I told her that my baby's presents were gone and my furniture was bleached and I didn't what to think."

The family says they had tons of presents under the tree. "I've been buying Christmas presents since August for my grandchildren." And, they just don't feel safe knowing how easy it was for someone to break in. "I won't stay here, I haven't stayed here since, it doesn't feel like home."

Police say they are still investigating, but it's unlikely that they will recover any of the gifts. If you have any information about the burglaries, you are asked to call Hugo Police at 580.326.2550.