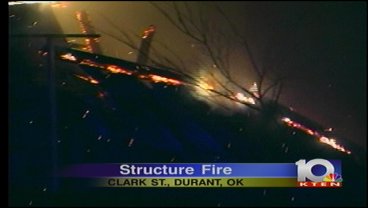 DURANT, OK---A fire near downtown lit up the sky and our phones tonight. The fire broke out around 6:30 p.m. tonight in the 400 block of Clark Street. Crews tell us it was a barn that caught fire. But it caused about 600 people in Durant to lose power. We've received some reports that power is back up and running in some homes in the area. OG & E crews are still on scene working to get power back up and running. No one was hurt and no cause yet.