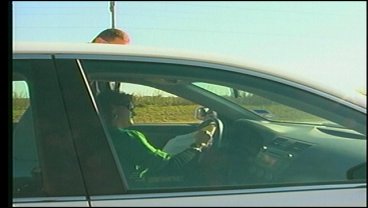 SOUTHMAYD, TX -- Southmayd Police are getting in the holiday spirit. They're writing checks instead of tickets to spread their Christmas cheer and reward the good drivers instead of just punishing the bad. Deeda Payton rode with Southmayd's Police Chief today as he patrolled the city.

The chief tells me writing checks works the same way as writing tickets. He says it's all about awareness and getting drivers to pay attention, and what better way to get someone's attention than with money.

Southmayd is a small town with a big idea, as Police Chief, Henry Gudenau explains. "What I'm looking for in vehicles driving today is more so what they are doing good than what they're doing bad."

Chief Gudenau is enforcing safe driving by trading ticket writing for check writing. You can call him Santa with a badge. I rode along with him to see first-hand how his "Holiday Safe Driving Awards" are handed out. "You see this white vehicle here, how it came up and turned on its blinker ahead of time...making the turn...kind of watch them a little bit and see how they're doing."

Chief Gudenau says he looks for courteous drivers who are paying attention and obeying the laws. "So we'll go ahead and stop 'em and talk to 'em."

The driver of a white car seems to be all of the above only they don't know that. They just know they are being pulled over. "What did I do? Actually ma'am you drove very well today is what you did."

Local teacher, Becky Beaty, was rewarded with a check for 20-dollars much to her surprise. "Scared me at first. I didn't have a clue what I had done, but it's nice to get a check instead of a ticket." she says this is the first time she's ever been stopped.

"I love the expressions. It's absolutely awesome!" Gudenau says his officers will continue rewarding safe drivers up until Christmas with 20-dollar checks, but bad drivers watch out. They're still writing tickets, too.

The reward money comes straight from Southmayd's general fund. Chief Gudenau got the idea of the holiday safe driving awards from a program down in Austin. This year he's got 300-dollars to use to encourage better drivers.