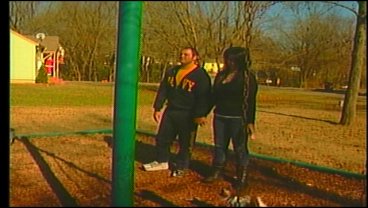 DURANT, OK --  A local serviceman, wounded recently in Afghanistan, is back at home with his family in Durant.  KTEN's Chris Severy reports.

The 2005 Durant High School grad is a Navy Reservist, and was injured during a Taliban attack as he helped pull others to safety.  Aaron Thompson humbly goes about his daily routine, shunning the title hero, instead preferring to be called husband and dad.  There was a time about a month ago when Navy Seabee, Constructionman Aaron Thompson didn't think he'd ever get to go to the park with his wife Shelena and 2-year old daughter Angelina ever again.  SWCN Thompson said, "I was kind of afraid that I wasn't going to make it back home, {pause} and I was scared for my corpsman.  I was afraid he wasn't going to make it."  Aaron had only been in Afghanistan for a month.  He was out on patrol when he and others came under attack by the Taliban, including the corpsman standing right next to him.  "I looked down and he was injured.  So, I pulled him behind a concrete bunker and I went to go get help for him," recalled Thompson.  Just before Thanksgiving, his wife Shelena got a 3am phone call.  "Usually he calls me about that time and I was expecting to hear his voice and it was somebody else saying Mrs. Thompson and I just knew that something bad had happened," she vividly recalled.  Two hours later, from a hospital bed, with a broken right leg and several shrapnel wounds, Aaron called his wife and said he'd be ok.  She said, "I guess they had flown him to a base where he could call me and he called me and told me everything and it was just a relief."  At one point during our interview, a touching moment, Shelena became emotional and started to cry.  But there was her husband, ready to help her, when she needed him most.  For now, this 22-year old father and husband, son and brother, will take as many hugs as he can get from his daughter and will enjoy walking hand-in-hand with his wife.  Sometime after the first of the year, SWCN Aaron Thompson will have to go to San Diego for more medical treatment.  But after that he'll be back home.  But he says he'd gladly go back to Afghanistan if he's called to action.