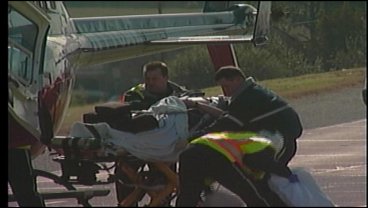 DENISON, TX -- Two people went to the hospital Wednesday when a taco truck t-boned an SUV.  It happened around 12:30pm at Spur 503 and Texoma Pkwy.

Denison police say the driver of the SUV was trying to turn left onto Texoma Pkwy, but didn't yield to a mobile food van heading south.  The van slammed into the driver's side of the SUV, pinning the driver inside.  Deborah Walkawiak, of Denison, was flown to a Dallas hospital with non life threatening injuries.  Irma Prado, also of Denison, who was in the taco truck, was taken by ambulance to TMC in Denison.  Denison police say that intersection can be dangerous.  Lt. Mike Eppler said, "it's just one where you have to look and just make sure nobody's coming and with a 50mph speed limit through here so you just have to be careful."  It's unclear right now whether the driver of the SUV will face charges for failing to yield the right of way.