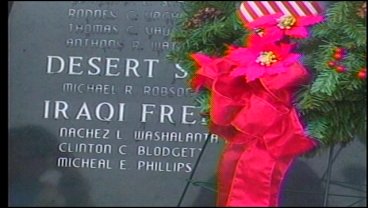 ARDMORE, OK---While you spend time with your families and loved ones this holiday season, the daughter's of the American Revolution ask that you remember the men and women who put their lives on the line so our families can celebrate the season in freedom each year. Meredith Saldana reports.

Each year the daughter's of the American Revolution place wreaths on the veteran monuments across Ardmore. Tuesday, they honored two heroic Ardmore men who selflessly served our country.

Our remembrance is in our own home town where names of many service members are engraved on the monument outside. The most recent name added to the monument downtown was Michael Phillips, an Ardmore High School graduate who lost his life in February of 2008 fighting for his country in Iraq.

His mother watched as a wreath was placed by his name on the memorial---one place she hoped to never have to see his name.

"I don't want it there but I'm glad that people remember and know that there are people in this world that are fighting for people that they don't even know. If you think about that, that's very humbling," says Angelia Phillips, who's son died in Iraq.

The daughters of the American Revolution said they were honored to have Angelia Phillips there as they honored her son Michael Phillips during his favorite time of year.

"Michael loved Christmas. His favorite part was the stockings and this year he'll have an empty stocking hung on the wall and I'm trying very hard to fill it with memories," says his mother.

His mother says another great way to honor a fallen soldier like her son this holiday season is to support their brothers and sisters in arms.

She's part of Thank-A-Soldier.net where they will find you someone to pen-pal with to make their deployment just a little easier.