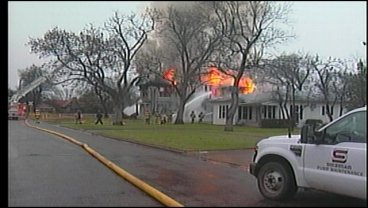 It happened just after 10am in the 400 block of N. Cleveland Ave., not far from Austin College.  The Sherman fire chief says the house had been abandoned for two years.  It took firefighters about an hour to put it out.  It was a stunning scene near Austin College this morning, drawing dozens of onlookers and most of the Sherman Fire Department, trying to put out the fire and make sure it didn't spread to the house next door.  Sherman firefighters had their hands full, flames shooting into the air from the second story of this abandoned historic house in the 400 Blk of Cleveland Ave.  Fire Chief J.J. Jones said, "Our first focus was on the occupied structure south of this fire and to make sure we didn't have any involvement of that structure."  This video was emailed to us by loyal KTEN viewer Leo Phea, who was out for a morning walk and was one of the first to see the fire.  Leo said, "This morning when I turned down this street and I looked back over my shoulder and I saw a blaze and I turned and looked and saw this whole structure just going up in flames."  As firefighters battled the fire, reports came in that a neighbor saw someone inside the house last night with flashlights.  Chief Jones said, "Although we're fairly confident that there's nobody inside, as soon as it's safe we'll get crews in there and make sure it was indeed unoccupied."  Added Leo Phea, "I just pray to God that there was no one in there.  Just never want anything like that to happen, especially around the holiday season.  Just pray to God that's not something that happened."  Because the house has been abandoned for the last two years, and it was too dangerous, firefighters fought the fire from outside.  "It's a little low water area over here which means the pressure sometimes fluctuates.  That gave us a little challenge when we were trying to contain the fire initially, but as you can see the fire went our pretty quickly," said Chief Jones.  As soon as the fire was out and it was safe, firefighters searched inside the house but didn't find anyone.  Sherman city crews have now demolished the house.  The cause is under investigation.