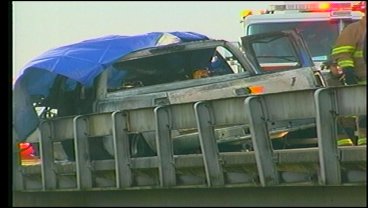 SHERMAN, TX---A one-car accident in Sherman left a Van Alstyne man dead. It happened a little after four o'clock this afternoon on Highway 75, just past the Center street exit in Sherman. Police say the driver of the pick up truck, 55-year old Billy Keith Carney, left the roadway, hit the guardrail and that's when authorities say the truck skidded along the guardrail for several hundred feet before the vehicle caught fire. Authorities have not released any information on the driver at this time, he was pronounced dead on scene. Traffic on both sides of 75 in Sherman was re-routed off the highway until about seven o'clock while crews continued to investigate.