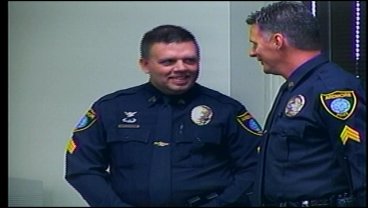 The Ardmore Police Department is once again in the news.  This time, for officer promotions. Meredith Saldana was there and has more on this story.

Chief Gary Adams tells me these promotions are not only good news for those being promoted, but also for the citizens of Ardmore who can expect even better service.

It was a special day for two Ardmore officers that were promoted to Sergeant.

The ceremony was held at the police department this afternoon.

After serving with the United States Marine Corp for 11 years and more than 10 years of service with the Ardmore Police Department Corporal Randal Williams was promoted to Sergeant.

He says it's something he's looked forward to for years.

"Today's the first step in a goal that I set for myself a long time ago to be a Sergeant here at the Ardmore Police Department and I finally made it," Williams says.

KTEN would like to congratulate both officers and their families.