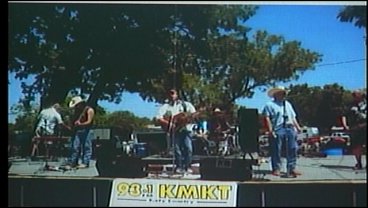 FANNIN CO., TX --  Some good news Friday afternoon for a local honky tonk band.  Sheriff's deputies in Fannin County arrested a man for stealing their trailer full of all their stuff.  KTEN's Chris Severy has the details.

The band "2 Bar Town" thought more than $10,000 worth of drums, other musical instruments and an elaborate public address system might be gone for good.  But they got the good news Friday afternoon that most of the equipment is OK.  Acting on a tip from a citizen, Fannin County Sheriff's deputies found the trailer full of equipment stashed behind a house in a rural part of the county.  They've already got one guy in custody.  A deputy said this alleged thief has a long rap sheet.  And they're still looking for another suspect.  Before the good news came, the band's lead singer, Chase Sanford, talked about the old showbiz adage the show must go on, "it's not gonna hold us back.  We're gonna play a show tonight in Honey Grove with Merrol Ray, a Toys for Tots deal.  Starts at seven.  Tomorrow night we play a show in Willis, OK.  So, we just keep on truckin'."