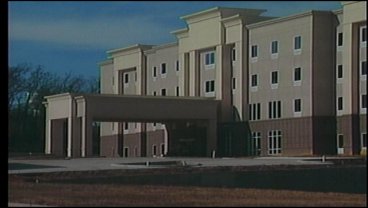 DENISON, TX --  An unfinished hotel in a prominent spot on Highway 75 in Denison.  Construction stopped months ago and now there are big for sale signs up in front of it.  KTEN's Chris Severy has an update.

That unfinished hotel is not for sale, at least not officially.  The big for sale signs are for the land surrounding the hotel.  As for the hotel itself, apparently the developer had another project in the Dallas area.  He decided to divert his crews from the Denison project to finish the Dallas-area project.  He had more pressing obligations there, both financial and otherwise.  Despite this vacant hotel and the vacant old Chili's restaurant building next door, one of the developers and investors trying to sell some of this land said Friday that the future of development in this area still looks good.  Elliott Bradley said, "we're just at a time now where we've gotta pause and take a breath and as a whole, as the economy is doing, and better days are ahead, not that far ahead in my opinion."  Bradley also said this hotel is about 85-to-90 percent complete.  That includes carpet in most rooms and paint on the walls.  And based on what he knows, that it could open as early as this next spring.