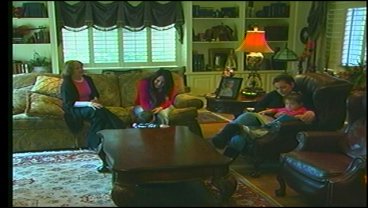 SHERMAN, TX -- A Sherman man is one of the latest soldiers to be deployed to Afghanistan. He said goodbye Thursday. Deeda Payton spoke to his wife and family about how they keep the home fires burning with out him here.

It's Army Specialist Seth Thomas's second tour of duty, but the family says it doesn't make saying goodbye any easier. He's their hero, though, so they hope and wait for his safe return.

Hoping and waiting. That's the Thomas family's life for the next year and half. Army Specialist, Jarrod Seth Thomas, a husband, father, brother, and son is on his way to Afghanistan to fight for our safety and freedom. His wife, Lauren says "You're on edge for a year and a half, yea it's scary, but I don't let him know that I'm worried because I want him to have that strong positive attitude, so when I talk to him I'm happy, but inside I'm breaking."

This is his second tour. His second time away from family. The second time his side of the bed he shares with his wife is empty. A year and half that he will miss with his two children. "It's hard to explain to a three-year-old what war is."

But his wife is practiced at keeping the home fires burning. Every man in her family is military. His mother, Kymn, says he has wanted to be a soldier since he was 15. Seth says "I've got a good group of people, good leadership. I think I'll be alright."

But she says she worries about her child every second. "Very sleepless nights, quite often as a matter of fact."

Especially after the Fort Hood tragedy. "That was heart wrenching to know that people were being deployed and for that to happen on our grounds. It was very difficult." Seth was at Fort Hood a week before the shooting. "I was relieved that Seth was not there."

But now the focus is on Afghanistan. "Him going to Afghanistan is terrifying to me."

His family is hoping and waiting to throw their arms around his neck and kiss his cheeks. "I wait for that day; in fact I pray for that day."

When I asked the family what they thought of the President's plan to send more troops to Afghanistan, they had mixed emotions. They all say they want him home, but his mother makes an interesting point. She says her son tells her he feels safer with more soldiers around, and so she says, in that case, she's all about it.