Another Accident At A Dallas Cowboys Facility - KTEN.com - Texoma news, weather and sports

Another Accident At A Cowboy Facility 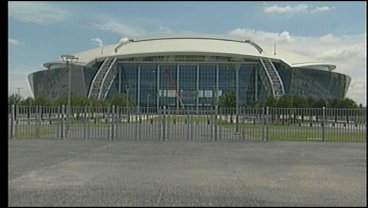 Authorities say the men -- who were not wearing safety harnesses -- came to a stop on a rain gutter-type channel that rings the near $1.2 billion structure. The accident happened at a time when temperatures were near freezing.

Arlington Assistant Fire Chief Don Crowson says the two were working on the top hatch of the retractable-roof venue.

Cowboys spokesman Brett Daniels says one worker lost consciousness after breaking a leg and suffering injuries to his head and chest. The other worker has a back injury.

The general contractor, Manhattan Construction Group, says the workers are employed by Birdair Inc., an Amherst, N.Y.-based contractor. A Birdair spokeswoman did not immediately return a call for comment.

Cowboys stadium has been the site of multiple accidents, including the 2008 death of an electrician when he touched a high-voltage line.

In May, the Dallas Cowboys practice facility collapsed and left one person paralyzed and 11 others injured.