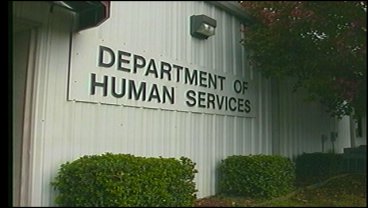 DURANT, OK -- Oklahoma is in an all out budget crisis with cuts across the board. The most high profile might be to the senior nutrition programs we told you about a few weeks ago. now DHS, the department that handles cases of child abuse and neglect, is reducing it's child welfare workers. Deeda Payton has the impact these cuts will have on local families.

It's a sign of the times, major budget cuts, but DHS in particular says it can handle them. They say they are making adjustments like everyone else and if there services start to struggle. They will re-adjust.

The recession is hitting Oklahoma where it hurts: education, public safety and now the state's social safety net.

State revenue is down which has translated to 5% cuts across the board of state agencies including the Department of Human Services that handles cases of child abuse and neglect. "Through attrition the number of child welfare works is declining which means as people leave their jobs, we're not replacing them."

Cuts, DHS says they can handle because the number of cases are down. In 2007 there were 12,222 cases in Oklahoma. in the last year there were 8,861 with individual case workers handling 18 to 19 cases on average.

So to meet that 5% cut at the agency, the number of child welfare workers is being decreased which ads says has been happening over the past several months.

"The biggest costs in almost every agency's budget are employment costs, so you're going to see more and more of this unless the economy begins to recover." Senator Jay Paul Gumm says their budget this fiscal year is way down from the year before.

"We tried to plug holes with stimulus dollars but didn't take into account growth of inflation nor did I take that there are some strings on those stimulus dollars as well." Now the debate is to either make deeper cuts in preparation for worse economic times or use the available rainy day fund to plug holes in state agencies. It is an ongoing debate.

DHS attributes the decline in the number cases to their new practice model that works with families in crisis sooner to help solve their problems.