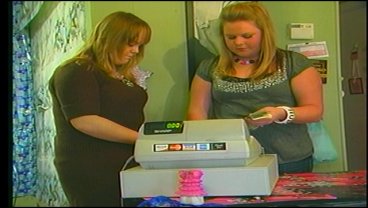 POTTSBORO, TX -- It's a story of inspiration. She's 18 and ambitious. Deeda Payton reports on a Pottsboro girl and store owner who is taking on a new challenge, collecting 500 toys for a local charity this holiday season.

The Pink Zebra Store opened in Pottsboro back in August. Now four months later, it is 18-year-old Jessica Young's platform to make the holidays even brighter for our local children. "This year, now that we have a store front we decided we wanted to do something a lot larger this year."

Young is collecting new, unwrapped Toys for Tots. "Hopefully each child will have a present this year on Christmas morning."

Her goal is 500 toys. She is also donating 20-percent of all the proceeds from her store this Saturday to the charity as well. "The response has been ok. There's been a few toys dropped off, nothing near 500, so we'd like to have as many as we could possibly get."

Not only is young an entrepreneur and philanthropist, she is also a student teacher for the special education program at Sherman ISD.

When asked what motivates her to take on so much, she says, she just likes to stay busy, which is evident by her accomplishments at such a young age.

This Saturday, December 5th, the Pink Zebra Store is offering free pictures with Santa from noon to five with a donation.

Then from 6 to 8 o'clock Saturday, young is hosting a Sip n' Shop with gift wrapping for all the customers. 20-percent of all proceeds will benefit Toys for Tots.