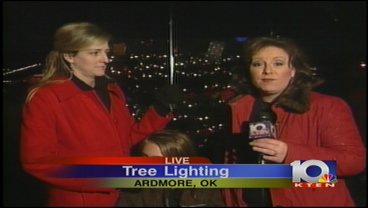 ARDMORE, OK--_It was cold and it was raining, but still a few hundred people lined main street in Ardmore, launching the holiday season and showing the true spirit of the folks who live around here.

It's that spirit KTEN is following this season. Because of the rain, organizers with the 'Toys for Tots' Southern Oklahoma Children's Parade had to light the tree a few minutes early tonight but when it came on, it was quite a show, animated with lights and music playing-- very impressive with decorations from local school kids.

Already, their phones have been ringing off the hook with families asking for help this year and that made them pick up the phone to make a call of their own directly to me and KTEN, asking for our help in getting the word out. So that's exactly what we're going to.

Carter County alone -- needs at least three thousand toys -- in the next few weeks to make sure a child doesn't go without. Because KTEN is looking out for you and because we were asked to help we're doing that. Yes, there are other area's in need, yes, we want you to give wherever you can and whatever you can.
I want to say this-- this Christmas is a little different -- because of so many of your friends and loved ones who may have fallen on hard times because of the economy, I've been there, maybe you have too.
I think that means we all need to work together, not for the competition or the glory, but to do the right thing for our home-town folks. We'll have a Toys for Tots box at our Ardmore studio right across from Walmart and we have a box at our Denison studio as well.
I'll give you a personal 'thank you' if you'll just stop by, drop off a new unwrapped toy to help a child.
It was quite a night in downtown Ardmore tonight and we'll do it again on Saturday with the Toys for Tots Southern Oklahoma children's parade so come on out and see us and please help all you can with your local charities.