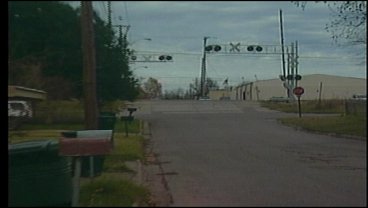 DURANT, OK -- A Durant man is behind bars after police say he attacked an officer.  KTEN's Chris Severy has the details.

It all started around 10pm Monday at a house just a block and a half from the Durant Police station.  First a call came in of a couch burning in front of the house.  Firefighters put it out, but about an hour later a recliner was burning in the front yard.  The man renting the house became combative with police and a struggled ensued.  Lt. Carrie Wyrick with Durant Police says, "the suspect kept pulling at everything on the officer's belt from the handcuffs and using those as a weapon to his radio and finally they were able to subdue the suspect."  Clifford Gibson was taken to the Bryan County jail where he's being held on a charge of assault on a police officer.