Sneak Peak Inside The New TMC 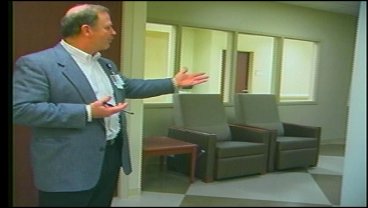 DENISON, TX -- The wait is almost over. The new Texoma Medical Center is set to open next week and will begin treating patients December 27th. Deeda Payton took an exclusive tour Monday.

Besides being visible from highway 75, the new TMC could fit the old TMC in it's first two floors with two feet to spare. That's how much larger this new facility is than the current one.

Construction of the new Texoma Medical Center in Denison started in June, 2008. Now it is about a week away from completion and crews are turning dirt to get the landscaping ready for ribbon-cutting December 9th.

On the inside, the new facility feels more like a hotel than a hospital complete with Christmas trees. And everything is new. As TMC Administrator, Randy Truxal, says "Overall, we've gone from a 1965 hospital with upgrades to a 21st century hospital with the ability to keep it state-of-the-art with the expansions because we've also built into the hospital the ability to expand.

The Intensive Care Unit has 32 beds all in the same area and all the rooms are private. There are no more semi-private rooms at new TMC. There are 165 beds total compared to 124 beds at the old hospital. And, the new hospital has the ability to expand to 241 beds, if necessary.

Once again, this facility will open December ninth, but they won't start transferring patients until the 27th.

You can also visit the hospital's web site at www.texomamedicalcenter.net.