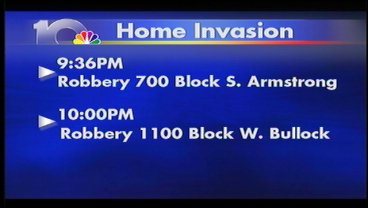 DENISON, TX - Police are looking into two overnight robberies that occurred within just minutes of each other a few blocks away.

The first happened around 9:30 p.m. Saturday in the 700 block of South Armstrong St. The victims told police two white males pushed open the front door, assaulted the residents inside and then stole cash and a bottle of prescription medication.

The second robbery happened at 10:00 p.m. about nine blocks away on West Bullock Street. At that location, one white male forced his way into the home and struck the homeowner with an unknown object. At this time, police say it is undetermined what the robber actually stole.

None of the victims were seriously harmed. Police are looking into if these two crimes are related.