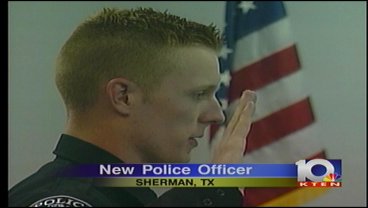 SHERMAN, TX -- The Sherman Police Department welcomed its newest officer Tuesday.  Officer Sam Boyle was officially sworn in by the Sherman City Clerk Tuesday morning.  Then he received his badge from Police Chief Tom Watt.  Officer Boyle is a recent graduate of the Sherman Police Academy.  Before he entered the academy, Boyle spent time as a military police officer in the United States Navy.  Although he's originally from Florida, he's looking forward to serving the City of Sherman and says today has been a long time coming.  "I'm excited.  I'm excited.  It's been a long journey.  Sometimes it's been difficult.  Sometimes it's been easy.  But I'm glad it's over now," Boyle said.  Officer Boyle begins on patrol immediately.  He says he hopes to move into a supervisor's role in the future.