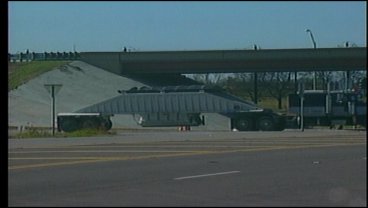 GRAYSON CO., TX -- Three weeks until the highly anticipated Highway 289 expansion project is scheduled to open in Grayson County.  But Tuesday, contractors may have thrown a curveball at that timeline.  KTEN's Chris Severy reports.

Grayson County commissioners are ultimately in charge of this project.  But Tuesday, a Texas Department of Transportation spokesman said the contractors, hired by the county, told TXDOT this highway might not open until after the first of the year.  Grayson County commissioners have scheduled a ribbon cutting grand opening for either December 16th or 17th.  The last word commissioners got from the contractors was those days are still within reach.  But Tuesday those same contractors apparently told TXDOT that it might take them just a little longer to finish the project.  Noel Paramanantham from TXDOT said, "We did find some paving issues that they need to correct and the signs and the striping and that needs to be completed so that it can be opened."  But Grayson County Judge Drue Bynum says it's his understanding that a middle of December completion date is still within reach.  Judge Bynum said, "I believe Commissioner Short sat down with the contractor and the engineering firm last week and collectively decided the middle of December would be a good date to shoot for a ribbon cutting."  But Paramanantham added, "The contractor is working on some punch list items.  But with the holidays, the work progress has slowed down a little bit.  The current estimates are that it's going to be the first part of the year before they have this roadway open."  To which Judge Bynum responded, "I was able to drive on the road yesterday.  Other than some incidentals and some other things to clean up, things of that nature, it appears to be the contractor will be on schedule with a ribbon cutting about the middle of December."  Judge Bynum said if the contractor cannot meet that deadline then fines would be imposed.  There's another potential issue here.  After one year of drivers using Highway 289, the State of Texas will buy it from the county.  But the county issued bonds to pay for this highway and the first payment is due in January 2011.  That means if drivers aren't using it before January 1, 2010, which is just five weeks away, someone will have to come up with the money for that first bond payment.