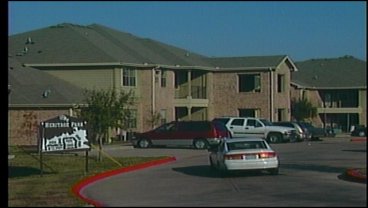 DENISON, TX -- Two Denison women were robbed over the weekend.  One was Friday night, the other Saturday night.  What makes this story even more bizarre is that these victims are roommates.  KTEN's Chris Severy reports.

Late Friday night one of the victims was just getting off work at the Best Buffet, a Chinese food restaurant on Austin Avenue in Denison.  Her two male co-workers went across the street to a convenience store.  When they did, two men came out of nowhere and hit the victim in the back of the head, grabbed her purse and ran off.  Then Saturday night, the roommate of the victim in Friday night's robbery had just gotten home at the Heritage Park Apartments in Denison.  She says someone knocked on her door.  She opened it just a little and that's when she says the two masked men burst inside.  One of them pointed a gun at her.  The other grabbed her by the neck and held a knife to her throat.  She gave them her purse and they took off.  Denison police are looking at the possibility both robberies are connected.  Denison Police Lieutenant Mike Eppler says, "Of course we certainly leave everything open.  At this point, that's a possibility we will look at.  Right at this point every possibility is still open.  If you have any information about either of these cases call Denison police immediately.