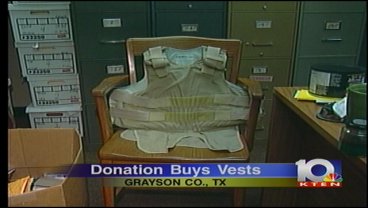 GRAYSON CO., TX -- They don't know who to thank, but Grayson County Sheriff's deputies will have new bullet proof vests thanks to an anonymous donor.  KTEN's Chris Severy reports.

Monday morning, Grayson county commissioners unanimously approved accepting $15,000 from an anonymous donor, so the sheriff's office can buy twelve new bullet proof vests.  This is one of the vests that's going to be replaced.  Each year the sheriff's office has to replace vests that get worn down and can't adequately protect the deputies.  Normally they get a federal grant to do that.  But this year, there just wasn't enough federal money available.  That's when the anonymous donor stepped forward.  Lieutenant David Hawley says, "He won't know what impact he has, probably ever, unless we could tell something happened to one of our officers, which we hope of course that never happens."  Since commissioners approved the donations Monday, the sheriff's office can now move forward with buying the bullet proof vests and getting them into service over the next few weeks.