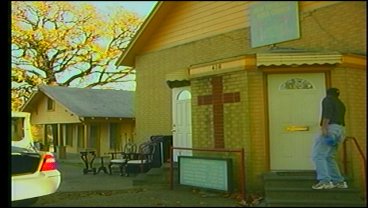 DENISON, TX---A fire at a church in Denison has left one congregation picking up the pieces. Michelle Gillespie reports that the New Testament Bible Church on West Hull Street held their normal services today but half-way through the last one, the power went out. They didn't think much of it, so they wrapped up the service, and left for the afternoon.

But within 20 minutes, a neighbor saw smoke coming from an office window in the church and called the fire department. The fire was confined to the pastor's office in the church and congregation members are just thankful it was put out quickly enough that it didn't damage more.

"The good thing is it was just an office, the church is still mainly in tact and just like with anybody, it gives you a sick feeling in the stomach to hear that your dwelling has burned. But we're not going to let that stop us, that's part of life, so we're just going to pick up and go on," says congregation member Bruce Peterson.

The fire marshall is still investigating the exact cause but many congregation members say it most likely started when the power was repaired and turned back on, shortly after they left.
They say the surge most likely caused some kind of spark in the electrical wiring in the pastor's office.

Because the damage was only confined to the pastor's office, church members say they still plan to hold services again next Sunday.