Congregation Members Gather in Sherman To Mourn Loss of Torah 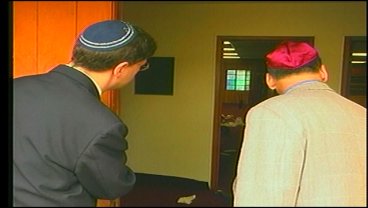 SHERMAN, TX---Members of the Beth Emeth Temple in Sherman honored the Torah in the place they think it probably ended up: at the Grayson County landfill. Michelle Gillespie reports that after it was stolen, and their synagogue was vandalized, they've never found, what they call, their "roadmap for life."

With forgiveness in their hearts, members of Sherman's Jewish temple gathered today to try to move forward.

"We actually went out there today, and had to bury...to bury part of us, but we will go on as we always did, generation after generation and be better for it," says congregation member Glenn Schachar.

Out of respect for the Torah, they didn't want cameras rolling during that ceremony, but Schachar, who has been a member of the synagogue for more than thirty years, says it was a way to bring closure and honor the memories he and his family have created.

"My daughter was Bat Mitzvahed in that synagogue and my family's all been here," says Schachar.

With the help of a local rabbi, they created a new memory, with today's burial ceremony.

"We went out to the county dump with members of the congregation and we read a few prayers, reflection on our loss, as we said goodbye to the scroll," says Rabbi Brian Zimmerman.

But at the same time, they're also fixing the damage left by vandals at the synagogue.

Today, crews installed new carpet to finish the clean up process, in hopes to have their first service back in the temple, in time for Hanukkah on December 11th.

"So, we will be re-dedicating this temple on the first night of the same holiday that the temple was re-dedicated," says Zimmerman.

As for the Torah, Rabbi Zimmerman says the search could take months but that several congregations in Dallas have already stepped up and offered to help in their search.