Oprah Announces The End Of Her Talk Show 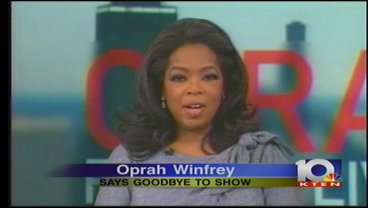 GRAYSON COUNTY, TX -- Today Oprah made the big announcement. She will end her daytime talk show in 2011. Deeda Payton went out to see what people have to say about the end of The Oprah Winfrey Show.

Love her or hate her, you've probably seen The Oprah Winfrey Show sometime over the course of the last twenty-three years. And, everyone has an opinion about her leaving it behind.

"After much prayer and months of careful thought I've decided that next season will be the last season of the Oprah Winfrey Show." 55-year-old Winfrey made an emotional announcement at the end of her show Friday saying she wanted to get ahead of any speculation about why she's ending the powerhouse talk show in 2011. "I love this show and this show has been my life and I love it enough to know when it's time to say goodbye."

The Oprah Winfrey Show started back in 1986. "Well I'm older so I've been watching her for a long time. I didn't realize it had been 25 years. I was surprised."

Today, the show is seen by an estimated 42 million viewers a week in the U.S. It airs in 145 countries. But, some local viewers say they won't be sad to see it end. "I think she's entertaining but I think she's too influential on the public so if she says it then it's the truth and sometimes she's not always right, soIi kinda don't mind seeing her go."

Others believe it is too early to call it quits. "I do believe she's done a lot of good in the world and I think she can still do a lot more."

New York Times Media Reporter, Brian Stelter, says Winfrey's departure will leave a big void in daytime television. "It's very symbolic of the move that viewers have been making from broadcast to cable. We see it in news, sports, entertainment and now, in daytime talk. There is no replacing Oprah in daytime. There will be a lot of people that try to fill that slot, but no one that can gain the same audience."

Winfrey promises viewers the final season will knock their socks off.

Winfrey is expected to start a new talk show on the Oprah Winfrey network to debut in 2011 in some 74 million homes.