'Twilight' Fans Line Up At Box Office For 'New Moon' 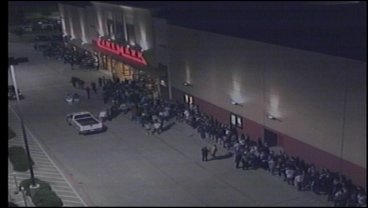 Thursday night is the opening night for one of the most anticipated movies of the Fall season. At midnight, the curtain goes up on "New Moon," the latest installment of the "Twilight" saga.

Fans of "Twilight" are coming back for more, and there are a lot of them -- all with their own reason to wait in line.

"I'm excited about the movie," says Marissa Hanson, a fan.

Adds Ramie Byers, who was waiting in line: "I love the 'Twilight' series. I've read all the books, so I'm excited, and I wanted to come."

"Because the line is around the building, and we bought our tickets two months ago," says Alainna Heslin, a fan. "So we wanted to get a good seat -- not have to sit and strain our necks to sit in the very front."

And, it may just be worth it. The first movie sucked in almost $400 million. The sequel, "New Moon," may take an even bigger bite of the box office.

Its heroine is Bella. Her boyfriend is Edward, a vampire. Her best friend is Jacob, a werewolf.   That makes for a complicated triangle but a marketing miracle.

The novels, written by Stephenie Meyer, have sold more than 70 million copies.

Part love story, part thriller -- "Twilight" has become a franchise that like its characters - seems almost immortal. And, local stores say this week, fans have been picking up all they can get.