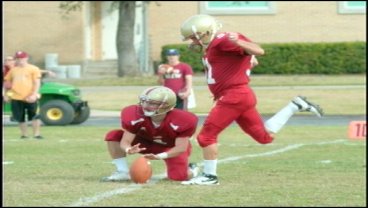 SHERMAN, Texas – Point after attempts are usually considered to be mundane plays in football, but on Saturday afternoon at Jerry Apple Stadium it was an extra point that made history for the Austin College football team and placekicker Tom Thompson.  That’s because Thompson, a graduate student at Austin College, is 61 years old.

By taking the field against Trinity on Saturday, Thompson became the oldest player in college football history.  The 61-year-old kicker, who is in his second year at Austin College, ran onto the field early in the second quarter after the ’Roos scored on a 47-yard-run by freshman Phillip Gonzales, and drilled the extra point to tie the game at 7-7.

Previously, the oldest player in college history was believed to have been Mike Flynt, who suited up for Sul Ross State University during the 2007 season.

The Austin College football team hung tough early but the Trinity offense proved to be too much as the Tigers scored 30 unanswered points to close out the game and make it a 44-10 final on Saturd ay afternoon at Jerry Apple Stadium.  The ’Roos finish the year wit h an overall mark of 4-5 and a 2-4 record in Southern Collegiate Athletic Conference play.

Austin College looked like they would be off to a fast start when Ross Hasten took the first play from scrimmage 57 yards into Trinity territory, but after getting down to the 1-yard line the ’Roos turned the ball over on a costly fumble that would keep AC off the scoreboard.

Trinity struck first when Robert Davidson completed a seven yard touchdown strike to Chris Baer with just 33 seconds to go in the first quarter, but Austin College answered quickly when Phillip Gonzales rushed 47 yards for the score just over a minute into the second quarter to tie things up after 61-year-old kicker Tom Thompson converted the extra point, making him the oldest player to ever play college football.

A 49-yard pass play from Davidson to Riley Curry on the ensuing possession for the Tigers set up another score for Trinity, this time on a two yard plunge by Baer with 10:49 left in the first half to give the lead back to TU.  Austin College got a good return from Matt Finke to set up a short field on their next possession but after a 36 yard pass from Blake Towery to Braydon MaQuar the drive stalled and John Reisig’s 37-yard field goal made it a 14-10 game with 8:45 on the clock.

Trinity extended their lead to 21-10 on the next possession when Davidson completed another touchdown pass, this time to Curry to cap off a nine play, 68 yard drive, and with just 1:25 on the clock Davidson threw his third touchdown pass of the half when he again hooked up with Curry for a 12 yard scoring strike, making it 27-10 heading into halftime after a missed extra point.

The Tigers added to their lead early in the third quarter when Davidson completed his fourth touchdown pass of the game, this time a 45 yarder to Caleb Urban, and Trinity would add another touchdown with four minutes left in th e quarter on a 16 yard run by Baer to make it 41-10.  Garrett Biel would add a 19 yard field goal with 11:42 left in the fourth quarter to make it a 44-10 final.

Hasten closed out his collegiate career with 92 yards on 13 carries and Towery wound up completing 2-of-9 passes for 42 yards in his first career start.  Tommy Koch added 23 yards on six carries, while Evan Coachman, Matt Finke and Nick Zitaglio each had seven tackles to lead the ’Roos, who managed just 54 yards of total offense in the second half to finish the day with 236 yards overall.

Davidson finished the day completing 20-of-25 passes for 311 yards and four scores, Baer rushed 23 times for 139 yards and two touchdowns and Urban had 143 yards on seven receptions to lead the Tigers.  Ben Robinson had seven tackled, a fumble recovery and an interception to lead Trinity defensively.  As a team, Trinity racked up 501 yards of total offense in the game.

Austin College athletic teams participate as a member of the NCAA Division III and the Southern Collegiate Athletic Conference.