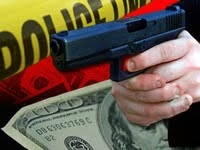 SHERMAN, TX -- Sherman Police are on the lookout for the man who held up at convenience store at gunpoint Thursday night.  The robbery happened at the Get & Go convenience store at the corner of Crockett and Travis streets on the city's south side.  According to Sherman Police, the man walked into the store around 6:30pm, showed the clerk a gun and demanded money.  When the clerk handed over an undisclosed amount of money, the robber took off on foot.  He's described as a white male about 6' tall.  He was wearing a dark sweatshirt, dark shorts and a gray ski-mask.  People with information are asked to call Sherman Police at (903) 892-7290.