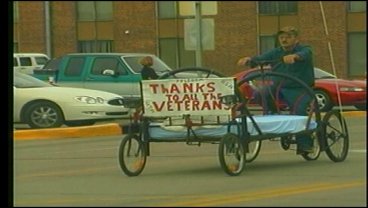 In honor of Veteran's Day, Applebee's gave away free meals to soldiers, veterans, and their families.  The restaurant was packed with those who served our country.  The solider's in attendance those who served in World War II, Korea, Vietnam, Desert Storm and the present day war on terror.

Veteran's Day is a time to celebrate the lives of veterans and today's solider's and it's also a day to honor those who gave the ultimate sacrifice, their life.  In honor of their courage, celebrations were held on the city streets and restaurants even offered veterans and solider's a free meal.  Our solider's told us, they were thankful for all the support.

Air Force Veteran Daryll Baker said, "It means a lot to me to serve a county that believes in God and knows how to treat its service men right," while Vietnam and Desert Storm Walter Chambers said, "We lost a lot and have done a lot of things.  We are thankful to Applebee's for giving us a thank you", and Stuart Presley, who served in our present war on terror said, "It's Applebee's way of saying thank you for all the sacrifices our soliders made to defend our country."

For others, they were just happy to be remembered by family.  Charles Cvara, a Vietnam vet said, "My son called me today and it really made me feel proud that he remembered me."

It was a special day for those who are the reason we enjoy our freedom.

To all of our soiders and vets, we thank you for what you have done and are still doing.