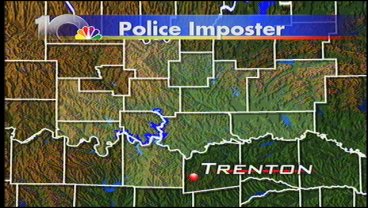 FANNIN CO., TX - A 17-year-old Trenton High School student was stopped by a fake police officer who reportedly took off with his money. Fannin and Collin County authorities say to be on the lookout for a possible police imposter.

According to the teenager, a vehicle that looked like a law enforcement vehicle began following him on State Highway 121 near the Fannin & Collin County border and pulled him over. The vehicle made a traffic stop and told the teen to get out of his vehicle. The posing officer conducted a search of his vehicle and belongings and then said he was free to leave. The teen later discovered $50 dollars was missing.

A Trenton School Official reporting seeing a similar car in the area and reported that to authorities.

The person representing himself as a peace officer is described as a white male, approximately 6'2" with a medium build. At the time, he was wearing a tan colored cowboy hat, a dark khaki colored uniform with a badge and a holstered black semi-auto handgun.

The vehicle was described as a black and white Crown Victoria with a Texas shaped emblem on the driver's door. The overhead light bar was believed to an older style rotating beacon type. There were no markings on the vehicle's fenders and the complainant did not recall seeing a spot light near the door. The complainant indicated the vehicle was very similar to a Texas Highway Patrol vehicle, minus the fender markings.

Anyone with any information about this vehicle and its driver, please contact Fannin or Collin County authorities.