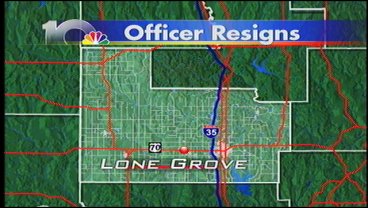 An officer who made news just a few weeks ago is no longer with the department. KTEN News confirmed with Lone Grove city manager Marianne Elfert Wednesday afternoon that Denney resigned from his position on Tuesday.

According to Elfert, that resignation came while she was also drawing up termination papers. According to officials, Denney threatened another officer right in front of the police chief.

No charges will be filed, but a few weeks ago police were called to an alleged domestic dispute between Denney and his wife, a former Lone Grove Police dispatcher.