Inside the Bryan County Jail 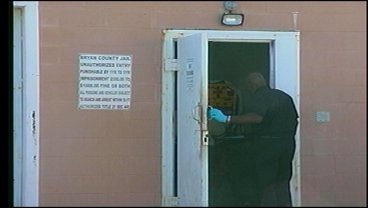 DURANT, OK -- We are looking out for your safety and your tax dollars. We are talking about the Bryan County Jail and the alleged criminals locked up inside. Deeda Payton takes a closer look at a facility that some say is out of date and out of space.

On the other side of this door, some of the most notorious accused criminals in Bryan County. From murder to sexual assault, they're all contained within a two block radius right in the heart of downtown Durant.

With a capacity of 123 inmates, right now, jailers in Bryan County are responsible for one hundred and one of some of the most feared suspects in the area. And, now the sheriff says they're running out of room. "That's more than we would like to see. This facility will hold 62, the other will hold approx. The same number."

Bryan County is unique that way. It has two jails in two separate locations. A fact that County Commissioner, Monty Montgomery, says is the county's first problem. "It's costing nearly double to house 123 inmates because there are two different locations."

But, all numbers aside, it comes down to who's who' inside and who to keep separated to keep peace among the inmates. "Sex offenders, crimes dealing with children, you've got to keep them separate because other inmates have their own judgement on those sort of things."

The most recent example, Jason Belew. He is accused of killing an eleven year old girl in Cartwright last month. "if you don't have them isolated. You've got two dealing with the same crime in the same place."

Another couple, forced to be separated from other prisoners, Abel and Denise Wolf who are charged with "unlawful removal of their daughter's remains." other charges are still pending.

But, Sturch says typically suspected murderers are fairly easy to handle. He says personality plays a bigger role than the crime they are accused of when he is separating the inmates. "It can be the guy picked up on a simple possession, he just doesn't like anybody, doesn't like law enforcement, kicks walls, doors, tears things up, creates riots, whatever."

As for pulling the financial strings and making the money balance, Montgomery says he has confidence in Sturch's skills of running a jail. "I'm not very concerned about those violent offenders or serious offenders in our jail." He's more worried about the about the financial strain having two jails puts on taxpayers.

Montgomery says over the next two years, the county plans to move the sheriff's office into the courthouse, so they can expand the jail into the current sheriff's office. He hopes that will put an end to running two separate jails.