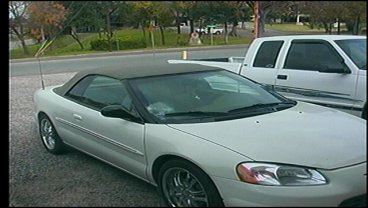 Vandals caused thousands of dollars in damages to more than 20 cars in Sherman over the weekend.  Monday, local repair shops were busy, local residents were mad and police vowed to catch those responsible.  KTEN's Chris Severy reports.

It was more than just BB guns.  It looks like these hoodlums used BB guns, bats and anything else they could to damage more than 20 cars in Sherman this past weekend.  Dovie Lockhart is trying to figure out where to come up with the $200 she needs to get the broken window in her van fixed.  Lockhart said, "Second time in a couple of months the driver's side window was knocked out of my van."  Budget Glass owner Billy Dickerson said replacing that glass won't be cheap, "It's very expensive.  They're probably looking at average around $200."  That news is not what Lockhart wanted to hear, saying, "It's very tough this time of year and the way the economy is goin' right now."  The phones have been ringing off the hook at Budget Glass in Sherman because the damage was so widespread.  Sherman Police Sergeant Bruce Dawsey said, "Some of the vehicles sustained multiple damage.  In other words, multiple windows were broken out.  Some of the vehicles there was only a single window."  Back at the glass shop, Dickerson said it was busier than usual.  "Well, it's been chaos, people callin' in.  We've probably had 15 or 20 calls for people needing glass - phone's ringing again - and we've got 7 or 8 tickets laying there to be done today and 3 or 4 already for tomorrow too," he said.  Unfortunately for Dovie Lockhart, her appointment to get her van fixed isn't until later this week.  In the meantime, she's hoping somebody gets arrested.  "They need to be caught, whoever's doin' this, put a stop to it in our community and everywhere," she said.  Sergeant Dawsey says police believe one person or a group is responsible for all of the vandalism this past weekend.  He says if caught, because of the shear amount of damage done, that they will likely face felony charges.