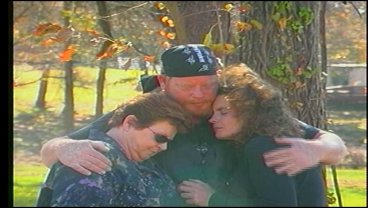 MEAD, OK -- November first, Texoma lost a young woman in a tragic motorcycle accident involving a deer. When we aired that story, we were immediately contacted by another local family sharing the same tragedy. Deeda Payton is now helping the two families survive their losses together.

Two local families, less than 40 miles from each other, with tragedy in common. "When I heard it on the news, what had happened I could relate to it. I know how they are bound to be feeling and I just wanted to go the extra mile to pay my condolences to the family."

On November first, 22-year-old Danielle Sellers of Graham, Oklahoma was killed on highway 377 in Springer when a deer jumped in front of her motorcycle.

Kip Messer of Mead, Oklahoma says he knows the shock the family must be going through because he too is surviving tragedy, the very same tragedy. "On the way home from Golden Corral a deer jumped in front of my sister and she didn't make it, so I can honestly relate to what the family may be going through."

Kip's older sister, 45-year-old Debbi Waters, died on October 8th in South Carolina leaving behind two children and three grandchildren. "Just being able to talk about it. As hard as it is to talk about and as difficult, that's for me, that's the only way of recovering."

Recently, Kip contacted KTEN hoping to get connected with the family of Danielle Sellers and offer his support. We were able to reach Danielle's sister who lives in Ardmore. She has agreed to meet face to face with Kip.

KTEN hopes to be there when the two families meet.