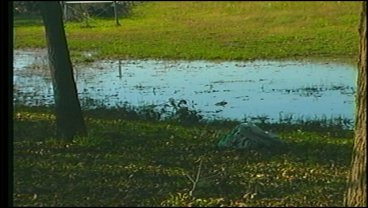 TOM BEAN, TX---A couple is forced from their home because of flooding problems. They say a recently built man-made pond is destroying their possessions, not mother-nature. Michelle Gillespie reports.

The Texas Commission on Environmental Quality is inspecting the pond just down the street from Bob and Alice Hillerby's home.

According to the couple, when it rains, the overflow from the newly built pond flows straight onto their property. After heavy rains two weeks ago, that's exactly what happened. Now their photos, documents and memories are destroyed.

"The creek was out of its banks, my neighbors been here for 15 years and never seen more than six inches of water," says Hillerby.

Because of the rains and the pond levels two weeks ago, the water level inside his home rose several feet high.

"By the time I got into the living room it was up to my knees," says Hillerby.

Hillerby has lived at his Tom Bean home for three years. He says the most his house has ever flooded has been an inch or so after the heaviest of rains but this year his neighbor to the south has changed that after they built a man-made pond several acres wide and a water spillway that feeds into a creek behind his home.

"I quickly drove up there and shined the headlights on the spillway area and saw a wall of water coming over it," says Hillerby.

That water and flooding have now forced Hillerby and his wife Alice from their home with no where to turn.

"All I know is I'm in over my head financially right now, with repairing the house and legal fees and I don't know what all else because we had no flood insurance," says Hillerby.

But now the community's stepping up to help. The Prothro Center in Pottsboro offered the Hillerby's a temporary home until they can repair theirs and the Tom Bean Volunteer Fire Department has offered to tear down walls and help rebuild the home. Hillerby says that without their help, he couldn't afford to do it himself.

"We've had help from people that I don't even know," says Hillerby.

TCEQ is investigating the man-made pond to determine what action, if any, needs to be taken.

But in the meantime, Bob and Alice Hillerby say that the overwhelming support from the local community has kept them going throughout this devastating ordeal.