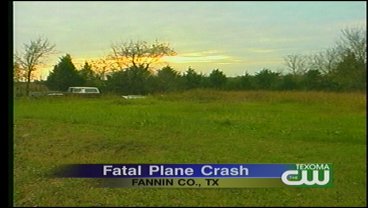 FANNIN CO., TX - Federal investigators are looking into a plane crash that killed 2 people on Saturday.

Linda Wingo, 59, and William Pearson, 57, were killed Saturday morning when the plane they were riding in crashed into a field north of Bonham. The two were the only people on board and both were from Leonard, TX.

According to a spokesperson for the Federal Aviation Administration, the Hornet plane took off from Jones Field in Bonham and experienced engine trouble a few minutes later. It crashed into a field just west of State Highway 78 and burst into flames.

FAA investigators spent yesterday doing an on-site investigation. The National Transportation Safety Board will also be looking into the crash. Authorities have not determined a final report of what went wrong. That could take several weeks.