Football Fans Speak About the Sport & the Ax 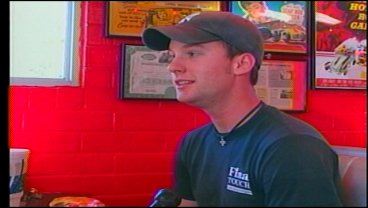 GRAYSON COUNTY, TX -- The countdown to the "Battle of the Ax" is almost over.  We are one day away from one of the biggest high school football rivalries in Texas. Over the past few days, we've shared the history of the game with you. Now, it's time to look at the sport. Deeda Payton talked to some local football fans about what makes the sport so exciting.

Football, it's a great spectator sport. "Speed, strategy, hitting, I mean it's all, it's all exciting." And, like a good hamburger, fans just eat it up!

We caught up with some local football fans at MG's Restaurant in Sherman to find out what it is about the game that makes them jump to their feet. "Anticipating that one hit that can change the outcome of the game." "Tackling." "Have to be all the action. It's non-stop action from beginning to end you never know, the whole game could turn around any second."

Add to all that a historic high school rivalry and you've got Friday night's Battle of the Ax, and everyone at MG's knew a little something about that game. "Because Sherman and Denison, it's the biggest rivalry in Texas and this is the 111th game and Denison's had it and our guys are really good so I think we got it." "It's just the biggest game. You could care less about the others, you want to win this one."

Denison has won the Battle of the Ax the last two years, but who will win this year? If you're lucky enough to score tickets, you'll find out Friday night at Munson Stadium and you may just find a new reason to watch football.

If you don't have tickets yet there will be a limited amount available tomorrow night at the ticket windows on both sides of the stadium that will open at 6:30. There is a limit of two per person.